If you follow Shadowgun Legends on social media you’ve probably seen our sweet 3D images for each event. You may have thought: “That 3D image is pretty sweet … how do they do that?” Well, our Marketing Graphic Artist Marek Budík took me through step-by-step…

A jollier looking Captain Blueballs is back for the summer event

“The artwork I created for our Blueballs event is a good example of the process because it really shows how many different layers go into creating each image. Usually, we get a very loose brief like ‘action-packed battle scene’ but this one was quite specific. The brief for this picture was:

The Captain is in a heroic pose with one foot on a chest of loot (his groin is glowing blue). We should keep the pirate hat and eye patch, but the rest should be cleaner and more appealing than the original art. The environment can be a scene from Legends, or perhaps a desert island with lots of sky…

The original artwork for “The Hunt for Blueballs’ Treasure” event

When I’m putting together an image, I like to choose an appropriate reference point to help get a feel for what I’m creating. Since we were going for a space pirate theme with Blueballs, Treasure Planet came to mind. It’s an underrated Disney movie which had a lot of neat ideas, and it has the same kind of romanticized space-as-ocean thing I wanted to capture in the artwork.

Next, I put together a few basic sketches using as many variations as possible, then show them to my Art Director, Michal. We have a discussion and choose one, or if nothing works I carry on sketching. Here we chose the green one (image 3) because it’s quite clear and the colour scheme isn’t really something we’ve used before. 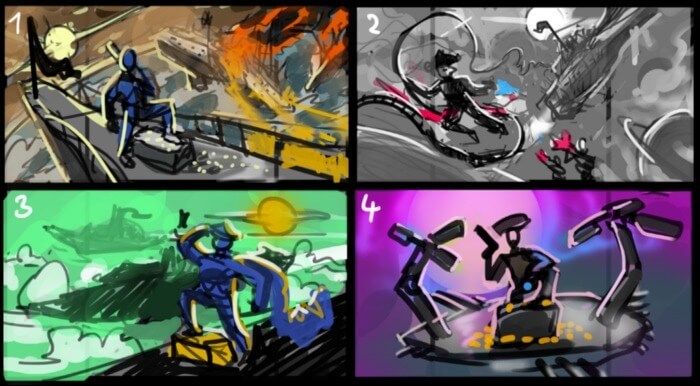 Four variations of the Blueballs theme

Once I have Michal’s approval, I use the Unity Editor to build the scene. Almost all of our event artwork uses existing in-game assets. I put together the character, pose it, then put together the background using models, parts of maps, image planes, whatever else comes in handy. It’s all about using your imagination to figure out what bits and pieces will make a compelling image. 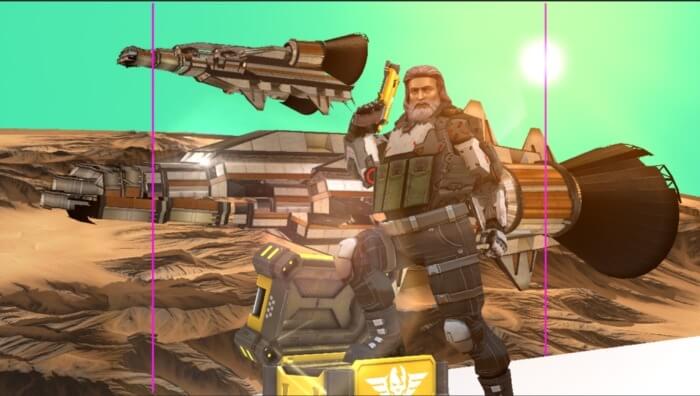 For an example of how we recycle existing assets, take a look at the spacecraft in the background. That’s actually the PFS Destiny, which is a huge crashed battleship that is a major location in Shadowgun Legends. I’ve picked it up, shuffled it around a bit, and found a good angle from where it looks less smashed up! 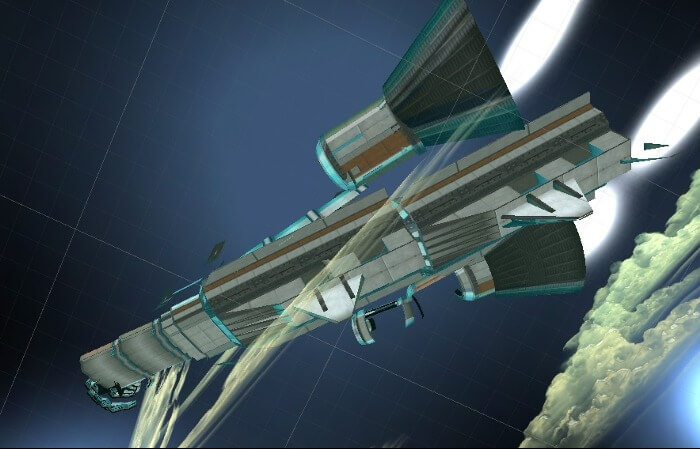 Blueballs seems like the kind of guy who would wear a cape, so I added one for this image. I could have just used Photoshop for this, but I’ve been experimenting with cloth animation in Blender lately. I used it for a flag in the artwork for the Independence Day event, so I used the same blender file. I edited the shape of the cloth and simulated air blowing on it, then chose a moment that looked nice and exported the model into the Unity scene.

Once I had Blueballs posed with his crate of loot, I needed to give the image more variety. I found some free assets of barrels and clouds online which worked really nicely, and the planet surface is a background mesh from Legends. 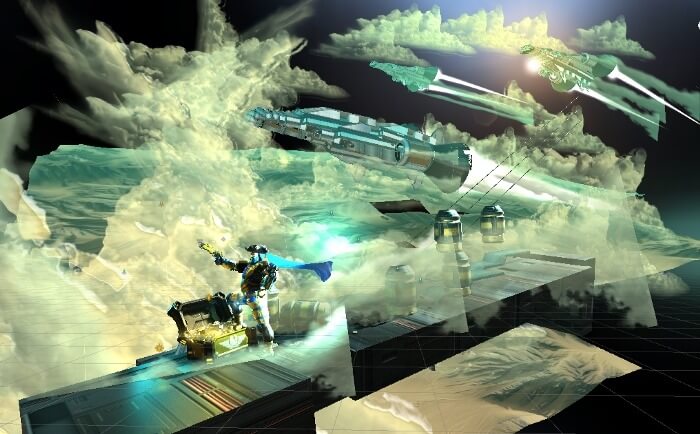 The image viewed in Unity Editor

Once everything is posed, textured and lit, I bounce it back to the Art Director for some more feedback. When he’s happy with it we end up with the render, and then it’s time for the fun part. I use Photoshop for colour correction, fixing details like model clipping, and transplanting faces onto character close-ups. This is where the artwork really comes to life. I also need to get creative because the in-game models aren’t really designed for this purpose, so we need to play around with it to get the image just right. 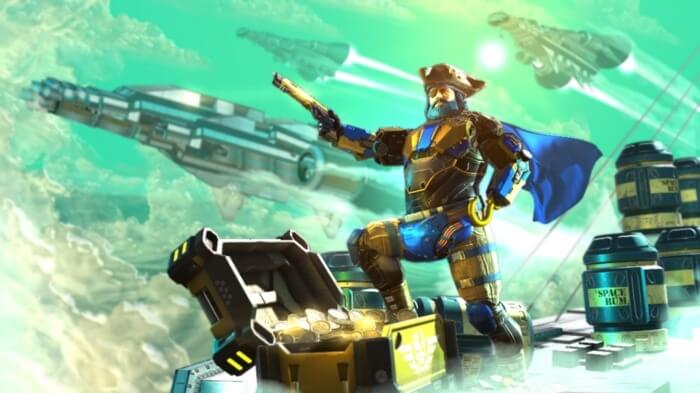 In this case, I received feedback that the character looked too different from last year’s iteration, so I wanted to go back and give him a similar face and robotic leg again. Here, the face is from some guy on a free stock image site and the leg is made from photos of an old diesel engine. 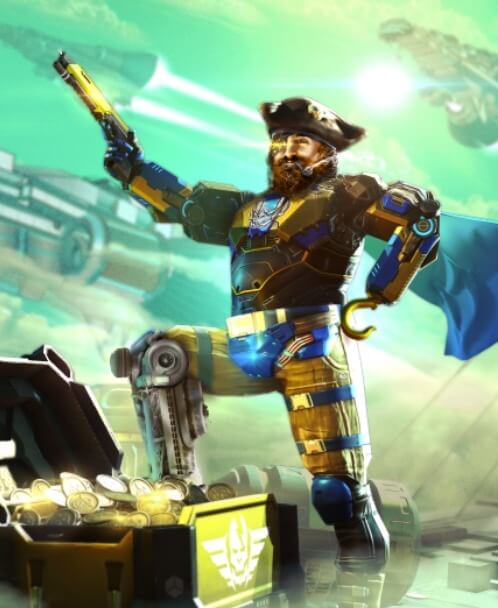 Blueballs with a new face and robotic leg

Next, we add the Shadowgun Legends logo and the event title, plus any other text that’s required. Then we’re done… almost! I also got a late request to change the weapon Blueballs is holding. He needed to have the event weapon, Lusty Betty, which is tied into the character’s lore. 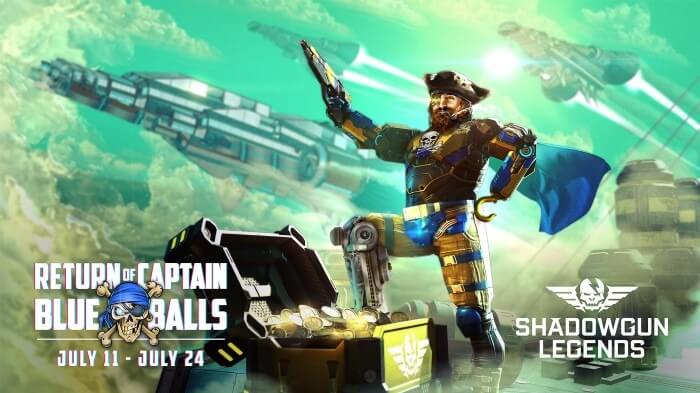 The image again, with the legendary item this time

We’ve recently started using Facebook’s 3D image generation. For that to work, I export the depth map using a special camera in Unity called Height Map, then add the branding and other stuff in Photoshop. 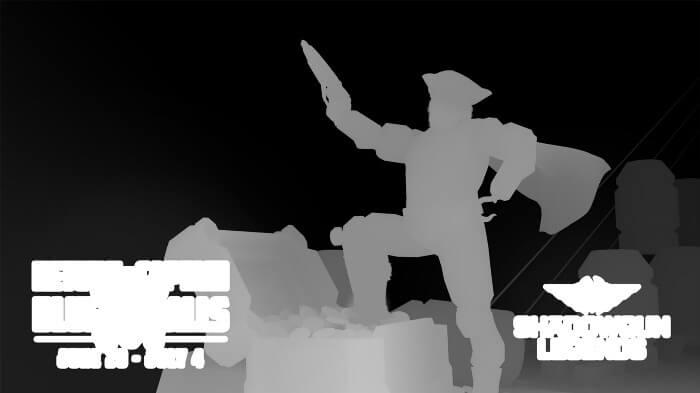 A depth map created in Unity

Lastly, you feed the original image and the depth map into Facebook. They crunch all the numbers and the end result is this:

…and that’s pretty much it, you’ve got yourself a 3D photo!”

Did you like Marek’s story? Then check out our job openings here and you could also become a part of the MADFINGER team. Follow the MFG blog on Medium for more glimpses behind the scenes and other fascinating articles from the world’s greatest indie studio!