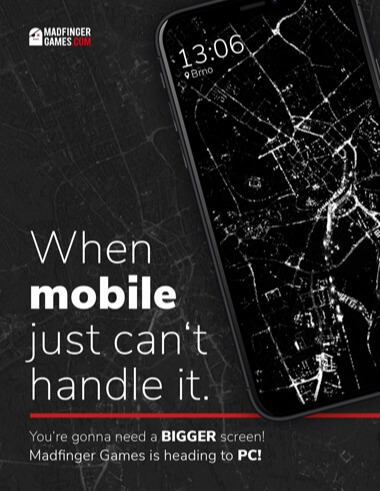 We are very excited to announce that our newest game, currently in development, will be a realistic hardcore FPS for the PC! We realized quite quickly during the design process that the game is simply too huge for mobile so we decided to not only switch platforms but also game engines. To explain just a little bit more, we asked our founder and CEO Marek Rabas a few questions:

More than ten years ago, you, along with the other founders of MADFINGER Games, left the PC games market and decided to focus on mobile games. But now you're back with your new PC game. What led you to this decision?

What can the players look forward to? Can you at least give us a little bit of an idea of what this new game will be about?

Since the founders of MADFINGER Games all started their careers by working on such massive titles before establishing the company, this next big step for the studio can be considered as a return to their PC roots. Furthermore, MADFINGER Games employs veterans of the video game industry, who left their mark on such renowned games as The Witcher 3: Wild Hunt, Quantum Break, the Mafia trilogy, Hidden & Dangerous 2, and the Vietcong series, with the last two titles solidifying that the studio has talented creators proficient in the hardcore shooter genre.

If you’d like to be a part of our biggest game yet, then why not check our careers page at www.madfingergames.com/careers? We are hiring now, and maybe you’re exactly who we’re looking for!