MADFINGER takes on the shooting range

Making FPS action games full of blasting firearms is certainly possible without actually firing a single real one, but when we got offered the opportunity to try it out and see how it really feels, we just couldn’t say no. Thankfully, the professional instructors at TRIGGER Service Brno were more than happy to answer all our questions and patiently guide us not just through basic gun safety and usage, but also explain in detail the inner workings of many of the firearms that we were about to use on the range.

And what a collection it was! Pistols, revolvers, submachine guns, rifles, shotguns, all of varying types and calibers. My eyes were immediately drawn to the Steyr AUG, made possibly most famous in Counter-Strike. “Are we going to be using that as well?” I asked, barely managing to contain my excitement. “Sure, if you want. No problem.” replied the instructor, making me feel like a little kid during Christmas. I have to admit I was never that much into guns, to begin with, always finding them quite intimidating, but having a chance to try out one of my favorite video game weapons in real life? Hell yeah, I’m gonna take it!

After the instructors made sure we were all clear about the safety regulations and knew the basics of handling guns, we put on our eye and ear protection and headed to the shooting range. There, all hell broke loose…

Don’t get me wrong, everything was going exactly as planned. No issues whatsoever. What I wasn’t expecting was how incredibly, absurdly, astonishingly LOUD those things are! Even with ear muffs on, the blasts from some of the assault rifles, like the CZ BREN 2, Bushmaster M4, the classic AK-47, or the aforementioned Steyr AUG, were enough to make me jump a couple of times before I’ve gotten used to it. My countless years of playing first-person shooters definitely didn’t prepare me for that!

The other thing that surprised me was just how much recoil there is, even when firing from something smaller, like a Glock 17. Speaking of recoil, some of us (including me) left the range with slightly bruised shoulders. In my case, I got “kicked” when firing the renowned Mosin-Nagant. That rifle is no joke, but I have to say I found the bolt-action mechanism immensely satisfying, same as the pump action on the Remington 870 shotgun. After a few shots, I could almost hear the DOOM music kicking in…

However, the crowning jewel must have been the absolutely ridiculous Desert Eagle that some of us got to try out. After being relentlessly persuaded by one of my colleagues, I fired it once, and it felt like a grenade going off in my hands. Nothing like Counter-Strike at all! But I have to say it was awesome… even though I think I don’t ever want to do it again.

Overall the time at the shooting range was incredibly exciting, but most of all educational. We’re going to do our best to put all these new experiences into our future project and bring you something perhaps a bit more realistic, thrilling, but most of all fun. Stay tuned, and soon you’ll learn even more! 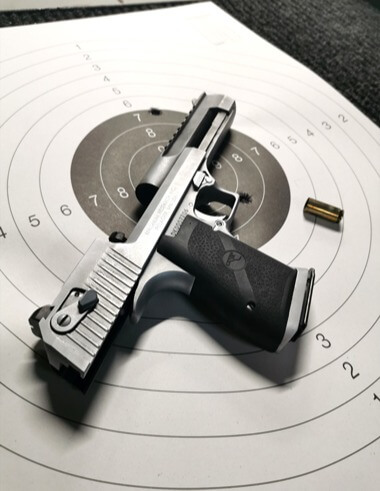